After a two-week visit to see family in Illinois, I had much catching up to do. Not just with the laundry and unpacking, but also playing hostess for garage sale #2 this summer! I had enough "stuff" left over after my first garage sale, that a few friends of mine approached me about doing a joint sale. They also had lots to get rid of, and wanted to put together a multi-family event the weekend after we returned home.

We set up shop the day after we arrived back home, and hosted the yard sale all weekend long. I made over $100 letting people haul away my junk. We packed up two loads of leftovers in the car and hauled it all away to Goodwill when it was all over. Thanks to all efforts involved, my garage is now empty...except for the boxes.... 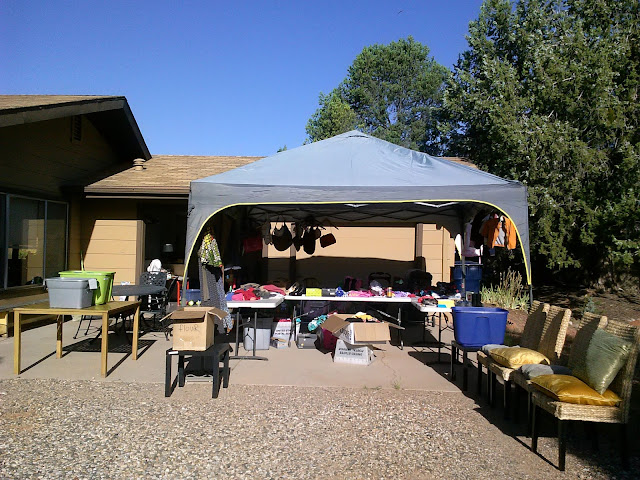 All summer long, my one aim has been to prep our house for the potential of moving. Corey and I have talked about leaving Sedona for almost two years now. We have felt our time here slowly drawing to a close. The only questions were, "Where would we go?" and "What would Corey do for a job to support his family?" Since I don't really have a career I am committed to, and he is the sole bread winner in our house, it really just boils down to Corey and his job. Without a source of income, we have no possibility of leaving. Since I am still pretty committed to raising the kids, the idea of me trying to land a job somewhere that would make enough to take care of the family was laughable. The entire fate of our family rested upon Corey and his job.

Right after school let out for the summer, something shifted at Corey's job, opening up the possibility for us to make our plans to move a reality...

Corey managed operations in Sedona for White Tie Transportation while another fellow managed operations for the parent company, Divine Charter, down in Phoenix. In the late part of May this year, the guy down in Phoenix took another job in California, leaving his position wide open. Corey stepped up and filled in as the "interim" Operations Manager. He has been doing this all summer long. This means that during the week, he has been living in a hotel room provided by the company down in Phoenix. I take the kids down mid-week to spend some time together as a family, and then Corey comes back on the weekends. It's been tough, but somehow, we have managed to enjoy our summer vacation, in spite of being mostly separated as a family.

After successfully performing the duties of Operations Manager all summer long, as well as going above and beyond the job requirements, Corey's boss(es) offered him the position! It came with a raise that was too nice to turn down. This means that the Sheridan family is headed to Phoenix by the end of August. We were given an opportunity to leave Sedona, and have a way to be supported (with Corey's job). It's a nice package deal.

Also, this move means that we do not have to totally leave our friends in Sedona forever. We can still make delightful weekend trips to Red Rock Country. Moving to Phoenix also puts us closer (by two hours) to the airport. This means that all of our family living in Illinois can visit more easily. Living in Sedona means that they have to buy a shuttle trip, or pay extra to fly to Flagstaff (or that one of us has to drive a 4-hour round trip to pick them up from the airport in Phoenix.) Living 25 minutes from both airports means that whomever flies in for a visit doesn't have to shell out extra cash, or spend extra time travelling to Northern Arizona just to see us.

We are also familiar with Phoenix. It sure beats trying to start all over in a new city. We have friends in Phoenix, we know the parks, restaurants, and neighborhoods too. It's a smaller "big step" than moving across the country or to another state, like we had been discussing before this promotion came about.

So what does this mean for Fun Dollars? I have no idea. Corey and I have not had a chance to talk about that part yet. We just got word a week ago that he was actually offered the position. We have spent the last week looking for a place to live and filling out paperwork. Yesterday we received word that our application was accepted and we can proceed with our move south. We have pretty much suspended our Fun Dollars for the month of July. Since we have been travelling and making extra trips to Phoenix, we are just living in "Spend-what-you-need" mode. No budget, just being conscious about what we are spending. So, after we get all settled in our new place, we will put our Fun Dollars system back in place. (I hope we get a raise in our Fun Dollars too. That would be a nice reward for all the single-momming I have done this summer with him gone.) Whatever happens, I'll keep you all informed about our changes as Fun Dollars evolves and adapts to life in the big city.

Until September (yes, I will be moving, and my parents are visiting this month too), Happy Spending!

Posted by Rachael Sheridan at 9:14 AM No comments: