A Trip to the City

Ever since we picked up "Nana" and "Dedah" from the airport over a week ago, Carrick has done nothing but chime the wonders of the Lite Rail. In the past year, Phoenix Sky Harbor Airport built an elevated tram system (similar to the monorail at Disney World) to transport passengers from the Metro Lite Rail system to the airport. We watched in awe as they constructed a bridge that towered over the rest of the airport, wondering what it would be. Bit by bit, the construction was completed, and the bridge's use was revealed.

I decided that instead of endure endless questions about the Lite Rail from Carrick, I could just indulge his curiosity and actually take him on a ride. I knew that he would dearly love to use the Sky Train, but the problem was the transportation from our car to the Sky Train station. There is no parking, just a massive carport for drop-offs, either by car or by city bus. I would have to park at the next nearest "Park and Ride" station, buy a ticket, ride the rail to the Sky Train station, and get off.

I did my research online about rates and schedules. I also called an attendant to make sure I understood everything. After all, if I was going to take my kids on a field trip through the city using public transportation, I needed to know I was getting on the right train, and not taking us somewhere unknown.

After school, I picked up Carrick and surprised him with our outing. We first stopped at Burger King were I put some mailer coupons to good use. The kids were also surprised that Burger King had a play place. This was their first experience with one that wasn't at a McDonald's (which they have only experienced twice ever.)

With full tummies, we headed out to Central Phoenix. I got slightly lost, but thanks to GPS, I made my way to the 38th Street Park and Ride. We parked, purchased tickets (to ride all of 6 blocks) and waited for the Mesa Eastbound to arrive. After alighting at 44th street, we climbed up the stairs to enter the massive, air-conditioned world of the Sky Train station. 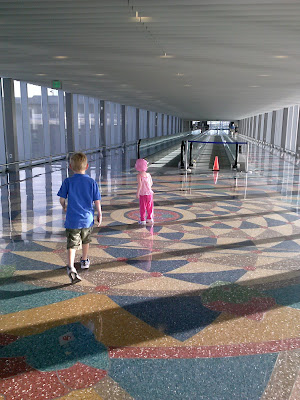 It is still a fairly new facility, but it is streamlined and efficient. A passenger can either be dropped off at the station by a friend, or can ride a city bus or a Lite Rail train to the Sky Train Station. (There is no parking lot.) Once inside the station, you can print your boarding pass at a kiosk, buy a bottle of water, and use the restroom. It seemed like a vast building compared to the amount of usage it might see at one time, but I guess that adds to its impressiveness.

On the uppermost level of the Sky Train station, there are rows of automatic doors on each side. A "train" (a two-capsule tram) arrives every 4 minutes. The children and I watched the automated flashing announcement scroll across the arrival board above the doors "Next train arriving in 3 minutes". The train arrived and the doors slid open. We quickly scrambled inside. We were the only passengers in the second capsule. I felt like I was in a space ship, or a citizen in a Star Wars movie. The kids hurried from one seat to the other until the voice chimed, "Please hold on", and the tram took off at surprising speed. 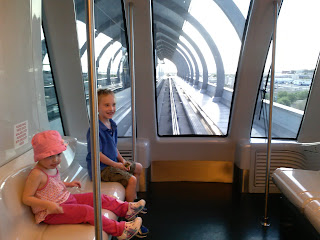 I could not believe how quickly the tram increased velocity! I had to actually hang on! It zipped down the incline towards the airport. We rounded a bend, and then, for the fun part, we elevated high up over everything crossing the "sky bridge". This was part of the construction of the Sky Train that had me burning with curiosity. As they built it, I saw this concrete structure towering over the airport and wondered, "what the heck are they building? Is it a monorail? Are cars going to use it?" It captivated my imagination. Now I was ON it!!!! It seriously was like being on a roller coaster! Being that high up and going the speed we were going pumped a bit of adrenaline through my body.

The kids and I had giant smiles on our faces as the female voice announced, "Terminal 4", and the tram slowed to a stop. We rode to the end of the line at Terminal 3, and then exited the Sky Train. We could have stayed on because the capsule we were in just started running backwards to return to the Sky Train station. The capsules are driverless; they all run on computer and sensors. We waited for three more minutes until the next tram arrived. We rode it to the end of the line and exited.

As we walked across the enclosed glass bridge over Washington Street, I was brimming with pride. My two little tykes were perfectly behaved for this incredible adventure into the city. It was no small thing for me to take them (alone, Corey was at work) on a Lite Rail I had never used before, transfer them safely, and get back to the car. I was so impressed with how well they listened and stayed with me. No running off, no meltdowns, no whining, just rapt attention to what was going on around them, taking it all in.

I gave each of the kids a high five as we headed back to the car. "Well done," I said, "You guys are officially city kids." 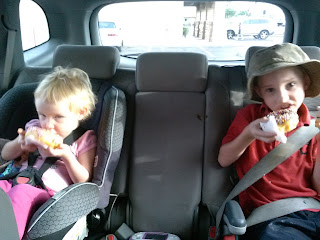 Posted by Rachael Sheridan at 9:14 AM No comments: