I came to a shocking realization this week...I have now gone public not only about my intentions with Carrick's 11th birthday, but also with a new relationship. I now proceed with caution because as with any relationship, things are subject to change at any moment. While it takes a fair bit of courage to come out about being with a new person, it takes even more for me to publicly post about this new person...and his kids...

So, I will be open, yet discreet. I will also walk with the understanding that we are all new at this and will take it one day at a time. But as of right now, the way it stands, we are all housemates and we are all on this journey to Hogwarts together.

Part of what I enjoy about Carrick earning this trip is that I am earning right along side him. Now that I have established myself as a single person, I have successfully started to manage my own finances as well. That is part of why this has become fun for me again. I am earning and saving and it's all mine. I am no longer the spoiled housewife spending an allowance given by the breadwinner husband. I am a single (yet partnered) gal paying rent and bills as well as saving up for my dream vacation.

When I originally began this journey, I had no intention of taking anyone else besides my own kids. But one day, I shared this dream with my house mate. He said that sounded like an awesome idea. He thought a road trip with all of us would be totally doable. It made me nervous, but excited at the same time. Travelling can be dicey even with the closest of families. What about taking a blended "family" on a 16 hour road trip? I will reiterate...I proceed with caution...

With the idea of taking 4 kids instead of two kids, my perspective changed. I also started to see the qualities of each house in each of the four kids. Ironically, they each embody the traits and characteristics of each of the Four Hogwarts Houses. I was delighted that while I was shopping over Spring Break this year, I found the perfect gift for each of the kids in preparation for this journey: 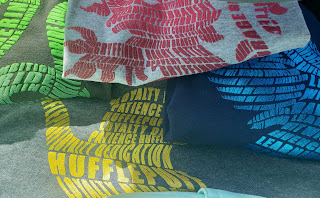 They each recieved their house T-shirt.

So, who are these four individuals? Lets meet them.

Carrick, is the main character in this journey. It's all because of him. So, let's meet Carrick first, shall we? Carrick and I share a special bond in the we are the two Ravenclaw representatives on this Hogwarts journey. "Wit beyond measure is man's greatest treasure" is the house motto of Ravenclaw. Ravenclaws are the oddballs as well as the innovative thinkers. Carrick has embraced his inner "nerd" as he calls it and it has become part of his identity. He has found power within himself by drawing out his wit and using it. Carrick and I like to engage in deep conversations and bounce theories off eachother. As a Ravenclaw myself, I see the same traits in Carrick. There is no mistaking his Hogwarts House. The Eagle is the mascot of Ravenclaw house, representing the soaring mind and imagination of those who are a part of this house. Carrick's imagination and creativity are boundless. He is my little Ravenclaw.

Lily, my daughter is also someone you may have met before on Fun Dollars blog. She takes after her father in representing Gryffindor House. She is bold. She is courageous. She will look at problems head on. Even though she has timid moments, she is always self-possessed and draws her self up to meet challenges beyond what I would expect from her. The Gryffindor pride and chivalry is deep within her. Nothing holds her back. The Lion is the mascot of Gryffindor, demonstrating the pride and courage of the house.  Lily embodies the lion; a loud roar and a ferocity that lets you know who is boss.

The Hufflepuff of the group is the oldest of the "bonus" kids. (We're not married, so they're not step kids. I have been told "bonus" is the correct term for family-esque members.) For now we will call him Older Brother. He is the rule-follower and the helper of the group. He is the reliable one, the hard worker. He is Hufflepuff through and through. Loyalty is this kid's middle name. The Badger is the mascot of Hufflepuff House, soft and solitary. Older Brother is a sensitive kiddo who prefers one on one time, which is part of why he is such a great helper.

In stark contrast is Little Brother. He is the Slytherin of the group, just like his father. Little Brother is mischief with a devious twist. He has an ornery giggle to match his mischief. He is cunning, in the sense of showing ingenuity. He is always crafting odd little projects from his imagination. He also has quite a bit of ambition. He is likes looking for ways to make money, whether they are realistic or not (Like wanting to resell his unwrapped Halloween candy to the evening walkers in the neighborhood.)  The Mascot of Slytherin House is the snake, small but dangerous. You just never know what that kid will come up with or try to get away with.

We enjoy each of these kids just the way they are. Understanding them within the context of their Hogwarts Houses helps me to relate to them and be a better guide for them. It also helps the kids understand one another too. The kids also pull a sense of pride in representing their Hogwarts Houses. Ravenclaw, Griffindor, Hufflepuff and Slytherin. So, what are these kids doing to earn their own Fun Dollars for the trip? Look for the next Owl to deliver the post. Until then, Happy Spending. 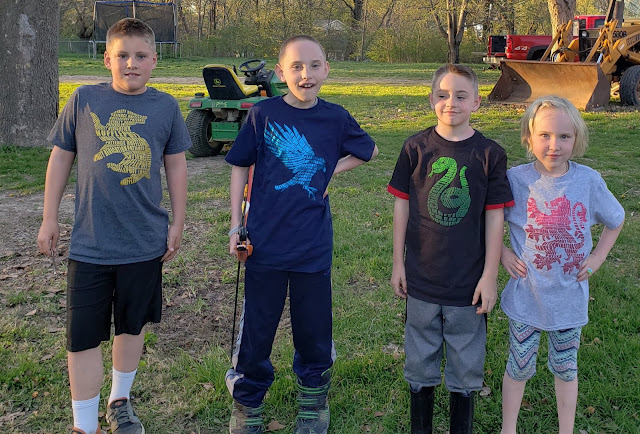 Posted by Rachael Sheridan at 6:37 PM No comments:

It's been a while. There's been a lot that has gone on in the world of Fun Dollars. To start with, I had to start over, financially, emotionally, professionally. If you want to know all the details of how I got to where I am now, this is not the time or the place. But if you want to walk with me from where I am now, you are more than welcome on my journey.

My starting place is my current residence. My destination is the Wizarding World of Harry Potter in Orlando. My time frame is Spring Break of 2020. My goal: to pay for a family vacation.

To bring you slightly up to speed, I am now divorced and living with a fellow single parent. Our kids were friends and it just made sense to raise our kids together instead of doing it alone. So, the people on this journey with me are my own children and my housemates; the guy I am seeing and his two kids.

A long time ago, when I was sitting in the NICU in Flagstaff, holding my premature baby boy, I read to him Harry Potter and the Sorcerer's Stone. It was the first book ever read to Carrick. When the Wizarding World of Harry Potter was first built, I knew I wanted to take him there some day. With that in mind, I knew I didn't want to take him to "Harry Potter World" without him actually knowing the story. So, consideration for his own set of the Harry Potter Series became my first hurdle.

Thanks to a sister who works at Half Price Books up in the Chicago suburbs, I acquired a set for Carrick. One by one she supplied me with a complete hardback set of the Harry Potter series. I saved each book as they came to me over the years, all with this Harry Potter trip in mind.

He had already read the Sorcerer's Stone in third grade and began the Chamber of Secrets in fourth grade. So he started where he had left off. He began reading his own copy in the garden of the Burrow. I loved watching him commit to the task. I also enjoyed answering his questions about the books. I remember his first query, "So, mom, why are they tossing the gnomes?"

As he progressed through the pages, I was delighted to see that he really was enjoying his reading time. My other "secret agenda" with all of this was to get him to read more. Before these books came along, it was all I could do to get him to read a Dog Man book. While there's nothing wrong with Dog Man, I knew the value of reading a book not laid out like a comic. Delving into a plot, discovering the characters, and immersing his imagination in a way that sparks his desire to keep on with the book is what I was after.

He has now completed books 1 through three and began on book 4 last week. I totaled the number of pages from his starting point in Chamber of Secrets and it came out to an average of 10 pages a day. So far he is on track. Even if he doesn't finish by his 11th birthday, Spring Break is a month and a half after he turns 11. (Just in case...) He has demonstrated commitment and discipline to this project, and I have no doubt that he will accomplish his goal. He has turned off his ipad at night in order to spend his time reading. He started taking his book to school to read when he is finished with his homework.

I am so excited to share this journey with him and with you. I have to go now...I hear the Sorting Hat calling.

Posted by Rachael Sheridan at 6:00 AM No comments: