Well, folks, I have reached a decision. After a year of documenting my Fun Dollars expenditures, I have found that I need to take a break. I have some other creative endeavors that I want to focus on. The few minutes every other day that I spend on Fun Dollars seems like small beans to the work that I truly wish to put out into the world. So unless I can hire either a full-time nanny or a full-time house keeper, I must start arranging my free time differently.

Thank you to everyone who has read and supported this blog with comments, entries, questions and feedback. I have learned much about the writing process and sticking with something long-term through the Fun Dollars blog. Hopefully some day in the near future you will hear of me somewhere other than on the Fun Dollars website, and you will be able to enjoy the fruits of my labor.

Until we meet again, Happy Spending.
Posted by Rachael Sheridan at 5:40 PM No comments:

Wednesdays are my day off, every week, no matter what. Lily stays home with me, and Carrick has half days at school. Since the half days range from 12:15 release and 2:15 release, depending on what Wednesday it is, my Wednesdays are scheduled very loosely. Oftentimes, I do light laundry in the morning, and take off to go shopping sometime before lunch (assuming it's a 2:15 release). I usually take the kids to the park after I pick up Carrick from school and have meetups with other moms. Wednesdays are a low-stress day. I just do whatever comes to mind, with just a little regard for household duties.

Recently, I have found myself fantasizing about eating lunch out at Pizza Picazzo's. It's literally right around the corner from my house. I like going there because I can get a salad and a drink with a slice of organic pizza from their lunch menu. It's generally a kid-friendly place, so I dine with Lily sometimes when Carrick is at school. It's been a long time since I've gone there for lunch, and I was just feeling in the mood to go there this past Wednesday.

I decided it was going to be a girls' day. I dressed Lily in a dress with a black and white striped bodice and a denim skirt. I too wore black and white on top with a jean skirt, black leggings and my new black flats (I bought them with the pay cycle that I did not report recently.) We went to Beall's  Outlet first. There were a few things I wanted to price there, but I ended up finding some things for the kids as well. There was a How to Train Your Dragon T-shirt in the boy's section that screamed "Carrick!". It was blue, his favorite color, and had a picture of the main character with his dragon on it. The price tag said $4.15, but when the lady rang it up, it came up as a 90% discount, and was $.67 (from the original price)!!!!

I also found a really cute 3T shirt for Lily. It was pool blue with a little purple seahorse on it. It was $4.00 on clearance as well. I figured I should get her something too, since I was buying something for Carrick. As we strolled through the store, she fussed with the T-shirts, and kept talking about the "Dragon Shirt". Needless to say, when we arrived home, she escaped with the bag and emerged minutes later clad in the blue dragon shirt that came down to her knees. Apparently it's hers now. At $.67, I should just go back and buy the other one so they won't fight over it.

While shopping, I also bought myself another coffee travel mug. I might have an obsession with drink vessels. It was yet another one with the Eiffel Tower on it. I just like to have a spare one if my other one is in the dishwasher (or forgotten in the car for a few days.) As we were heading to the cash register, Shania Twain came on the store radio. "Man, I feel like a woman..." she sang as I checked out with Lily, underscoring the girl's day theme. The grand total at Beall's was $10.00. 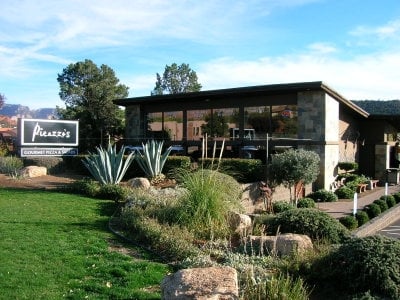 Afterwards, Lily and I headed across the street to Pizza Picazzo's. I thought about saving a couple bucks and just getting a cheese slice with my combo. Instead, the words of my father in my birthday card surfaced in my mind; "Treat Yourself". So, I did, ordering my favorite slice of pizza; the Puttanesca. It's basically a Greek Salad on bread with cheese. Tomatos, freshly sliced basil, Kalamata Olives and artichokes. That's exactly why I went to Picazzo's. If I had ordered the plain cheese slice, I would have left there still craving pizza because it's the Puttanesca that I really wanted. I ordered their "spicy" Ceasar salad and a Ginger Beer with my combo. Both were super satisfying. Lily had a slice of cheese pizza, and a LOT of my ginger beer (ginger ale, but spicier).  She was the perfect little lunch date.

The next day, it was back to work, and I did not pack a lunch for myself. Since I had Fun Dollars, I figured I would take off for lunch and go out again. I called Corey and we planned to meet at India Palace. It's fast because it's a buffet, and it's about the same price at the lunch combos at Picazzo's. Also, it's super healthy homemade Indian food. I arrived there at 1:00 as agreed, and he wasn't there yet. Rather than wait for him and risk spending too much time out to lunch on a work day, I went inside and began my dining experience.

Half an hour later, Corey called to apologize for letting time slip away. Apparently he was working outside on the patio, sitting in the sun with his shirt off and he lost track of time. I would too if I were working from home in the sunshine. I wasn't mad, but it was strange feeling as though I had been stood up...by my own husband!!!! He came into the restaurant several minutes later, gave me a hug and a kiss, and took off for the buffet. We did get a few minutes to chat, but I had to return to work ten minutes after he arrived. Oh well. Next time, I'll call to remind him on his work phone, not his personal phone, that we have a lunch date.

Happy Spending!
Posted by Rachael Sheridan at 8:17 AM No comments:

Every month, a fabulous little magazine arrives in my mailbox. With some scape of Red Rock Country on the cover, the words Sedona Monthly grace the cover. This international periodical proudly highlights the best of what this artsy little tourist town has to offer. From hikes to nightlife, Sedona Monthly is the best publication about Sedona.

The cover of this magazine usually has (a) professional model(s) each month. One of the talented Sedona artists responsible for the hair an makeup of these models is Liz Margin.

Liz hails from the Big Apple, and has a personality to match. Her edgy and trendy style is apparent as soon as you meet her. As a veteran of hair and makeup arts on the big screen, she has experience to back up her chic style. She walks the talk.

As part of my birthday present, my best friend took me to Liz Margin's home studio for some one-on-one makeup time. She wanted to buy me a new lip color. Leave it to my bestie to know that I need a new lipstick. She had her own personal color consultation with Liz a couple weeks ago, and got the idea to take me there for my birthday. She knew Liz through Zumba class (they are both instructors now.)

I really enjoyed picking through all the lipsticks and lip glosses. I ended up purchasing the first color combo I tried on; Micro Latte Lipstick and Sugar Berry Lip Gloss. I liked these two colors together because they look like a more bold expression of my natural lip color. They just give my lips a little "pop". 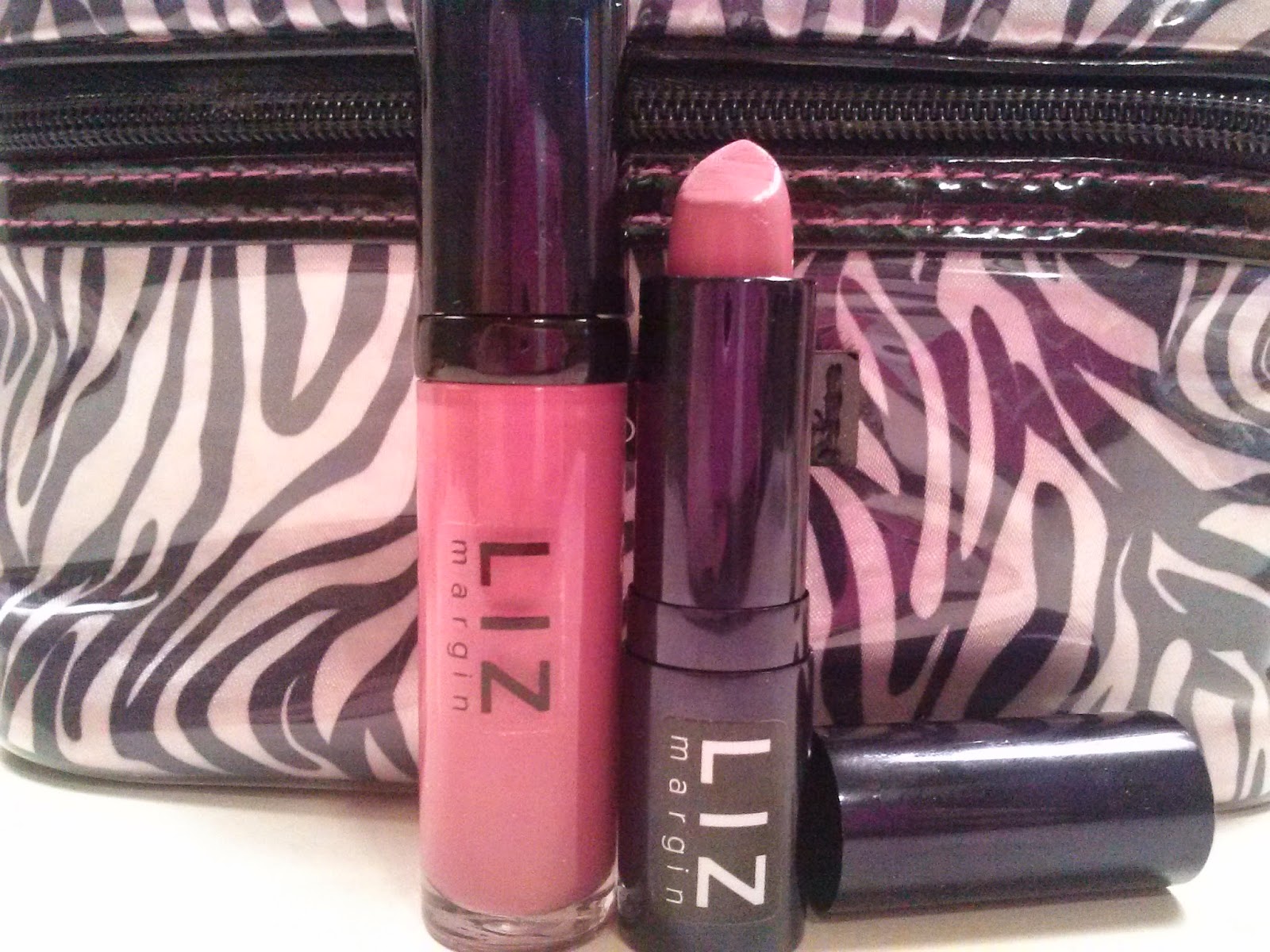 Liz Margin sells her cosmetic line at Favorite Clothing in Sedona, and you can check out her website at lizmargin.com.

Happy Spending!
Posted by Rachael Sheridan at 5:03 PM No comments:

Happy Birthday to Me

Well, as promised, I am coming to you from a brand new machine; a Lenovo Yoga (mini) to be exact. This white mini laptop folds over and becomes a tablet, fits in my purse and has me organized. My poor little acer netbook felt like an arthritic and senile grandmother compared to this little flash of technological lightning. I can now write up a post and not be interrupted by the computer randomly shutting down for 20 minutes to update. My birthday was on Sunday, so even though the Lenovo came today, It's still the best birthday present my husband has ever bought me.

On my actual birthday, I kept things pretty low-key. Usually I am so jazzed about my birthday, I'll tell anyone who will listen that I am celebrating my special day. I didn't even jokingly ask the theater employee if they gave a birthday discount when I bought my movie ticket on Sunday morning. Normally we go to church on Sundays, but for some reason there was no Sunday School or nursery care this week, so taking the kids to church was not an option. I decided to go see a movie with my best friend since we were on "sabbatical" for the Sabbath. What better movie to see on a day when I should be in church than 50 Shades of Grey? Honestly, it would not have been my first choice of movie; The Kingsmen looked way more up my alley. However, I had to skip out on a girls' night last Friday in order to get in a Valentine outing with Corey, and the girl's night was going to be opening night of 50 Shades of Grey. Since me and my best friend had to miss the girls' night, we decided to make up for it by going out for my birthday. We chose a time (and day) when our husbands would be at home to watch the kids.

After the movie, my friend and I went across the parking lot to Zainey's for frozen yogurt. I counted it as my birthday cake. Even though she bought my fro-yo, I still dropped $5.00 on a goodie cup to take home to Corey. Call it "paying the babysitter".

After seeing a very grown-up movie without my kiddos, and  eating frozen yogurt that I didn't have to share, I felt sufficiently celebrated for my birthday. However, we did do one more thing that day that made my 33rd revolution around the sun special; we took a family hike at sunset. Getting out into the fresh air and experiencing God's creation felt like I made up for the naughtiness of watching the movie during church time. My little darlings running around on top of Airport Mesa, Corey setting the pace and leading the family, sunset over the red rocks, the perfect end to a wonderful birthday. 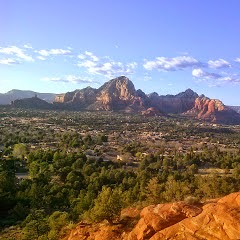 Happy Spending!
Posted by Rachael Sheridan at 8:41 PM No comments:

We'll be right back after a word from our sponsor...

Just taking a two week (one pay cycle) break on my reporting of Fun Dollars. My laptop is less than cooperative at the moment, and my birthday is coming up, so I have been told that a new machine is on the way. I have also been sick on and off, so my days are a little askew. Happy Spending1
Posted by Rachael Sheridan at 11:07 AM No comments: