For several weeks now I have been prepping and planning how this would all work.

I began with the banners. Each child received a gift bag with the materials to make their own house banner. I included glitter glue in their house colors, pipe cleaners, puffy balls and an optional magic marker. Tacky glue and scissors were the community materials.

Next I considered the vessels and filling for the house points. I scored 4 vases at Michael's and hit up Dollar Tree for the gems. (They have plastic gems perfect for adding to the vases, just like in the Harry Potter books.) While I was at Dollar Tree I had a horrifying Fun Dollars Moment when I realized that most of what I had purchased at Michael's I could have got at Dollar Tree for half the price. Lesson Learned. Always do Dollar Tree FIRST!!!!

The gems I bought only came in red, blue and clear. So I bought Silver and Gold spray paint to create the gems needed for Hufflepuff and Slytherin.

Last night I set the gift bags with the banner materials on the table. When they came home for the day, they were greeted with a gift bag in their house color. 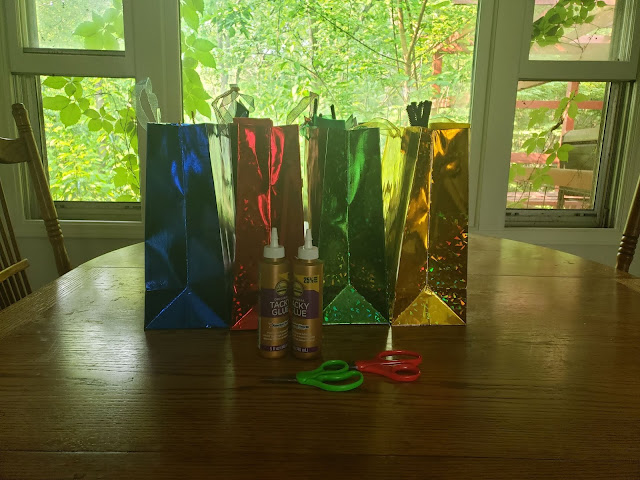 Each child had free reign with regards to their banner creation. Older Brother made me giggle a little when he pulled up his tablet to view the Hufflepuff House Shield.  He wanted his banner to be a true representation of his house crest. That's what I was hoping for when I came up with this; a genuine interest in participation.

As each kiddo worked enthusiastically on their banner, I read to them the Sorting Hat song from The Sorcerer's Stone. They each got to hear the qualities and traits of their house. 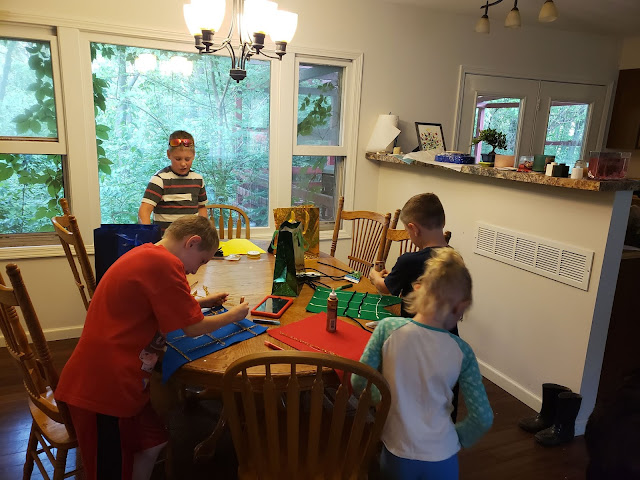 We let the banners dry overnight and hung them before breakfast this morning. They each received their first house point for finishing their banners.

So, the participation and willingness to place value on the House Points system seems to be there, for all the kids. Thankfully this makes sense and is attainable not only for my 1st grader but for my 5th grader as well. It's something that Boys and Girls can participate in, so all the kids are included. It also gives us a base understanding of what's ok and what's not ok. House point in, House point out. For behaviors that we see and want to encourage, we give a house point. For behaviors that we don't really appreciate, we take a house point. Are two kids bickering? House point from each. Did someone put away the dishes when we asked? House Point awarded. 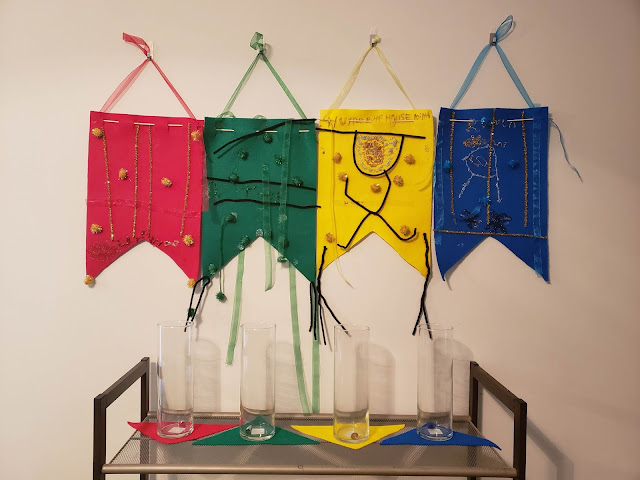 We had been paying the kids in coins for chores prior to the House Cup.  They kept them all in a mason jar piggy bank. But as with most incentives, the grown ups got lazy and would forget to pay for tasks completed or the kids did not place value in what we were offering. Sure the coins would add up, but not fast enough. Even when they had several dollars worth of coins, we wanted them to save them. Eventually the kids lost interest in earning money for chores, and we have just let it ride for the time being. The difference with the House Cup is that we are not placing a monetary value on every task performed. It's giving a credit. That credit is visibly represented with the gems accumulated. Also, it is "equal", meaning all the points earned are the same value. When the kids had a jar full of coins, one kid could have $5.00 or $1.00 but the same space was used due to the coins having different values. The kids like the fairness of the House Points system. They can see that if someone does one task and someone does another task, they don't get paid differently, they just each get a credit for the help they provided. We are assigning a One Point value to all transactions. (that will keep it fair and attainable for this first round.)

The Rules I came up with for the House Cup are as follows:

1. Only adults can give or take away points.
2. House Points cannot be requested, only given or taken. (so that way the kids aren't like, "Do I get a house point for doing that?" Or "will you pay me a house point for doing whatever?"
3. No theiving or lying. If they are caught taking House Gems, or if they lie about someone taking House Gems, they will loose ALL their House Points.
4. We only do House Points when the kids are all together. As I mentioned before, the two kids participating that are not my own children are my "bonus" kids, so they do spend time with their mom. So to keep it fair we only run the House Cup on days when all 4 kids are available to earn or loose points.

The children actually have no idea what the prize is at the end of the House Cup. We will run this for 3 months; June, July, August. At the end of the three months we will count how many gems are in each vase. The kiddo with the least amount of gems will get something ( they just don't know what it is.) The person who had the most would get the biggest something. That way everyone gets rewarded for participating. It also encourages them to hold a value to what we are doing. because I intend to run another round of House Cup with a twist after we finish the initial House Cup.

There will also be intermittent monetary encouragement during the House Cup.  I agreed to pay them an allowance. Since I am starting at Square One with finances, I wanted to go back to what I learned at Square One with regards to allowance...from the parent perspective.

When I received an allowance from my father when I was school-aged, I would receive one dollar every time my dad got a pay check. So that is what I am going to do with the kids. They will each receive one dollar to go towards their spending money for the trip every time I get a paycheck from now until our trip.

I have tried other methods of getting the kids to help out, or to encourage behaviors we want to see more of. But using the House Cup as a Money and Behavior solution was really what I was after. I want the kids to learn how to communicate. I also want them to want to be helpful.  they all have a common goal of doing their best with measurable and observable behaviors.

Since starting this post I have already had a load of dishes willingly put away.


Posted by Rachael Sheridan at 3:22 PM