House Cup Open: One Day Only

The fourth of July holiday found us smack dab in the middle of a two week span where the House Cup was intentionally suspended. Due to our summer schedule, all the kids were not going to be together for a period of two weeks. My son was going for a week visit to my parent's house. So with one kid gone, we were not going to give o take away any points.

However, the night before the 4th I was informed that I needed to include the Slytherin and Huffle puff on my 4th of July road trip. I was headed up north to visit my sister for the weekend. My Coparent Boyfriend was working on a project in the same area (out of town) and he wanted to see his boys for the holiday. So, I decided that opening up the House Cup for one day was my best bet at transporting three kiddos safely and effectively by myself. Otherwise, I was facing a three and a half hour car ride at the mercy of whatever behavior arose.  I knew I needed backup, and House Points were the way to go.

I wanted to make it fair, so I sent a message to my parents. I told them they could award Ravenclaw House Points for any help with chores, politeness or reading that was done. If he was rude or unhelpful they could deduct House Points.

Meanwhile, back at our house, Slytherin, Gryffindor and Hufflepuff all earned House Points by packing their own travel bags. I made a list of what they needed and they each took turns reading the list and packing. I also had them clean the windows of the car at the gas station before heading out of town. 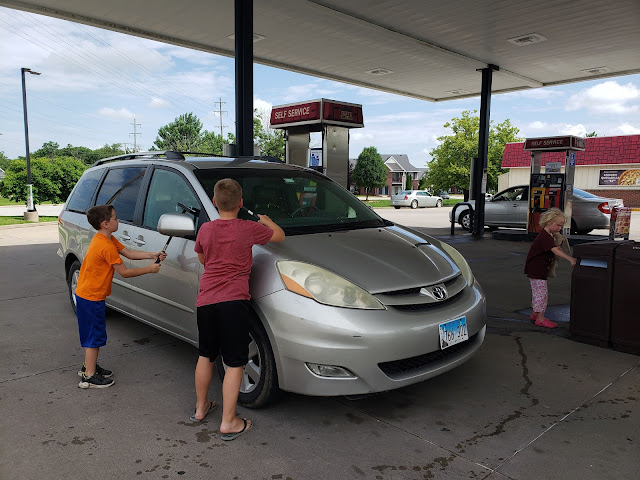 We had a pretty smooth trip with the three kids, until about 45 minutes away from our destination. Hufflepuff threw an empty soda bottle into the front seat. That was a House Point lost. He was quiet for the next half hour after that. I also had to send a message in the form of a House Point lost that it's not OK to pinch his brother.

At the end of the One Day Open House Cup, Ravenclaw won the most House Points. He finished the day with 8! Apparently the grandparents kept him busy.

Now that we are all back under one roof, the House Cup is back open and I am going to "double Down". From here on out, it will be 2 points in and two points out. It's not really changing the value of the transacions, but what it does do is fill up the vases faster. Even though we have been competing for half the summer, the vases still look mostly empty. I think that seeing the vases start to really fill up will give them a boost to get through the rest of the summer with enthusiasm. So far they still like it, and I want to keep it that way...It's nice having help with the dishes and not have to listen to complaints. A simple "House Points to Gryffindor" is all that needs to be said.

Posted by Rachael Sheridan at 5:44 PM