Since the kids are not all together this weekend to compete for any more points, I closed the cup this afternoon and started counting the gems.

What a wonderful experience this House Cup has been for us this summer.

It has really taught me something about better parenting. When you find that great motivator for the kids, use it. The House Points became the motivator and the uniting point for all the kids. They learned by watching each other win and loose points. They learned what behaviors we would and would not tolerate.  They even started using better manners because of the House Cup. We get voluntary "pleases" and "yes, Ma'ams" now. We got those occasionally before the House Cup, but I hear more of that type of language now.

I also learned that changing "One in One out" to random amounts of House Points ended up to my advantage towards the end. There were a few times when the motivation just wasn't there. Realizing that, I would come into the room with a basket of laundry (that I knew they didn't want to help with) and say, "Five House Points if you put away all the laundry that is yours in the next 30 minutes. I am setting a timer. For every piece of laundry I have to put away that is yours after the 30 minutes I will take out a House Point." So they had a choice, either win more House Points by doing it now, or loose House Points if I have to do it for you. (Let it be known that the kids were all on tablets at this point. So I was looking for motivation to get them to do a chore and put their game down without arguing.) I knew that if it were just one House Point, they could easily say, "pass" and ignore the request. But when 5 House Points are on the line, that changes the stakes a little bit. I saw how much even one House Point could change the game after counting them this afternoon.

There is a three-point difference between the Houses who recieved first, second, and third place!

As I was Counting the Points today, Carrick knocked on the Door. Since I was about to count Ravenclaw's points, I let him do it. 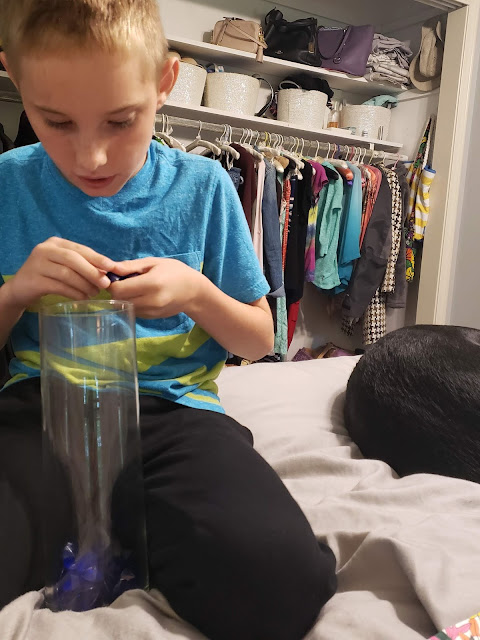 He counted 83 for Ravenclaw.

The reveal of who the winners are will be after the ceremony on September 1.

Until the next Owl...


Posted by Rachael Sheridan at 1:23 PM